The coach is a girl with brown hair, styled in a side high ponytail on the right. She wears a navy blue vest, with intersecting lines on the front that contains brown, light blue, tan, dark blue and pink hearts placed on the center of each intersecting lines. She also wears a white shirt underneath, a pink short frilly skirt and white sneakers. She also has pink hearts painted on her cheeks.

Two animals were present throughout the routine. The first animal is a light brown weasel, seen in the back of the planet. The second animal is a monkey with yellow skin and light brown fur, floating lazily far from the planet. Both of them only have a glass helmet on their head.

Gold Move 1: Point your finger to the screen and shake it.
Gold Move 2: Jump and put your arms up, bending your elbows 90° upwards.

Pop Goes the Weasel appears in the following playlists: 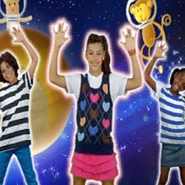 Pop Goes The Weasel on the Just Dance Kids menu 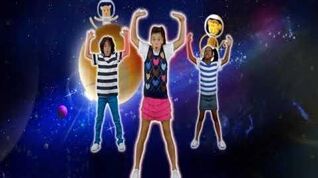 Retrieved from "https://justdance.fandom.com/wiki/Pop_Goes_the_Weasel?oldid=1204664"
Community content is available under CC-BY-SA unless otherwise noted.