Game Files
1A: Light Emerald
1B: Genoa
2A: Grandis
2B: Deep Red[citation needed]

The dancers are 2 girls, who were based on the official Moe anthropomorphism mascots that represent Bilibili named “Bili-tan 22 (22娘)” and “Bili-tan 33 (33娘)”.[2] They both have black and white outlines.

P1 represents Bili-tan 22 (22娘). She has blue shoulder-length messy hair with an ahoge (noticeable slim forelock of hair that sticks straight up) styled like a thunder bolt and has a light blue hair clip modeled like the logo of bilibili. She wears a powder blue top that is modeled after a school uniform, with a powder blue lower, a blue upper section, powder blue collar and powder blue sleeves with very dark blue borders. She also wears a light blue skirt, dark blue over-the-knee socks and black shoes. Her accessories includes a blue bow tie with a section at the tip in powder blue and a small fanny pack-styled pouch with a blue and powder blue strap, which carries a plush-like attachment of the bilibili logo. The numbers "22" are sewn on her left breast. Her gloves have a blue border and a blue button on the center of the top hand, with the left glove powder blue.

P2 represents Bili-tan 33 (33娘). She has light blue messy hair with an ahoge and a mid side ponytail, secured by a powder blue hair clip that resembles a play button and two very dark blue attachments on the button. She wears a powder blue sleeveless jacket with blue accents on the borders and part of the upper section of the jacket, which is partially open with a dark blue zipper. She also wears a pair of blue bands on her arms, a powder blue short pencil skirt with blue lines and accent on the top, dark blue tights and black shoes. She also has a hair clip on the left side of her hair, which is powder blue and modeled after the bilibili logo. The numbers "33" are sewn on her left breast. Her gloves are similar in design with P1. 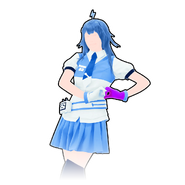 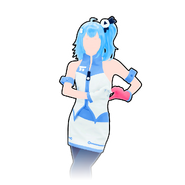 The background includes Chinese lanterns, fans, and umbrellas, as well as chibi versions of the dancers and Bilibili’s logos.

There are 2 Gold Moves in this routine, both of which are the same.

Both Gold Moves: Bring your arms down slowly while moving backwards. 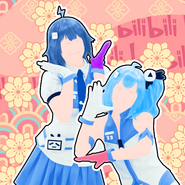 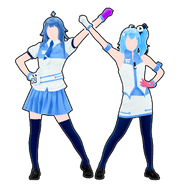 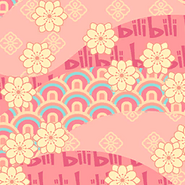 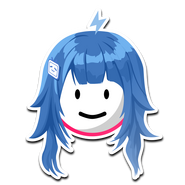 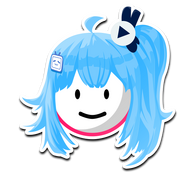 BiliBili banner for a Behind The Scenes video featuring Rainbow Beats 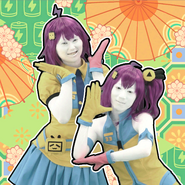 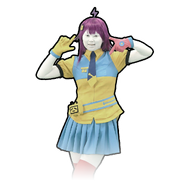 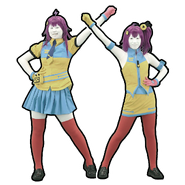 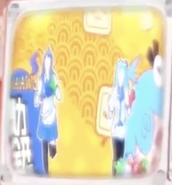 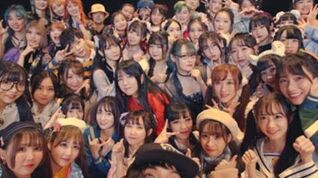 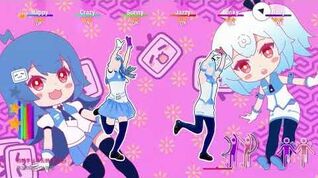 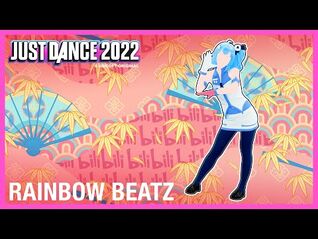 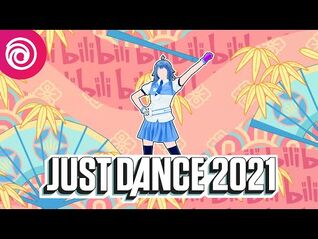 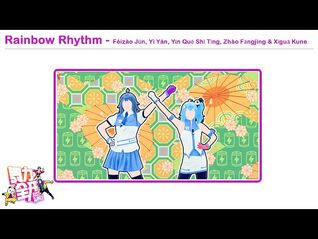 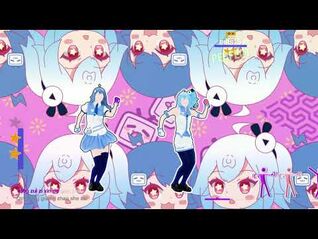 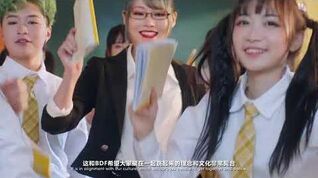 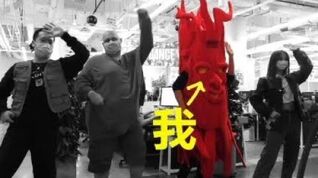