Rotten to the Core

"Rotten to the Core" by Dove Cameron, Cameron Boyce, Booboo Stewart, and Sofia Carson from Descendants is featured on Just Dance: Disney Party 2.[2]

C1 is a teenage girl who resembles Mal. Her purple hair is shoulder-length and becomes wavy at the ends. She wears a black tank top over a navy blue T-shirt. Over that, she wears a jacket that is mostly black and has a hoodie. There is a pink bandana hanging over her left shoulder. The left sleeve of the jacket is pink at the top and brown at the end, while the other is the opposite. She wears black fingerless gloves. She also has purple ripped that are ripped up a little, revealing her knees and other parts of her left leg. She is wearing black boots with heels and black laces.

C2 is a teenage boy who resembles Jay. His long, dark brown hair goes past his shoulders and is underneath a maroon beanie. He is wearing a sleeveless jacket with yellow and brown vertical stripes. The shoulder regions of the jacket are light blue. Underneath the jacket is a bright red T-shirt. On his hands are black fingerless gloves. He is wearing gray pants that have a smoke effect-like pattern and brown shoes.

C3 is a teenage girl who resembles Evie. She has black and blue hair that is slightly wavy, and part of it is tied into a style that resembles a crown. There is a white flower crown on her head. She wears a blue crop top, over which she wears another top. The long sleeves have fabric attached to them, which extend and covers much of her back to creat a cape-like effect. On her hands are fingerless black gloves. She also wears grey and black pants with a similar smoke effect pattern to C2 over a dark blue skirt with the same pattern. She also has black boots which extend past her ankles.

C4 is a teenage boy who resembles Carlos. He has poofy platinum blond hair. He wears a cream-colored leather jacket with red sleeves, and there are golden buttons around the jacket, There are gray and black shoulder pads that finish off the look. Over the jacket, he has a silver sleeveless shirt with a marble-like pattern on it. On both of his hands are black fingerless gloves. He has white cargo pants, and black knee-high socks which white and cream-colored sripes. He also has black boots.

At the start of the routine, there is a metal maroon wall covered with lots of grafitti on it, especially the main characters' markings (a dragon forming a shape of a heart for Mal, a snake for Jay, a broken crown for Evie, and two bones forming a black and white X for Carlos).

The wall moves away to reveal C1 in a grim corridor. There are red and faint white brick walls on the sides. Throughout the routine, the walls get slowly covered in more grafitti that features not only the aforementioned markings but also grafitti of different colors as well. Behind the coash are two poles holding multicolored string lights that remain off throughout the entire routine, and five big, metal cans surrounding the coach. In certain parts of the song, the cans jump to the beat of the song. A flash of light and a lightning bolt can be seen flashing to the song's beat sometimes as well.

When the characters switch and/or appear as backup dancers, a poof of purple, yellow, blue, and red dust (meant for Mal, Jay, Evie, and Carlos respectively) obscures the dancers and most of the time replaces them with someone else.

At the end of the song, the maroon wall from the start of the routine slides back in to cover the dancers.

Gold Move: Crouch down and hit the air with your hands as if you were playing drums.

Rotten to the Core 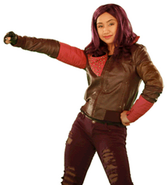 Rotten to the Core on the Just Dance: Disney Party 2 menu 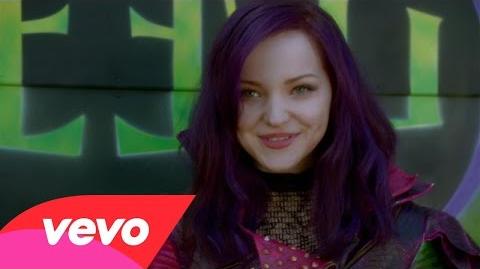 Descendants Cast - Rotten to the Core (From "Descendants") 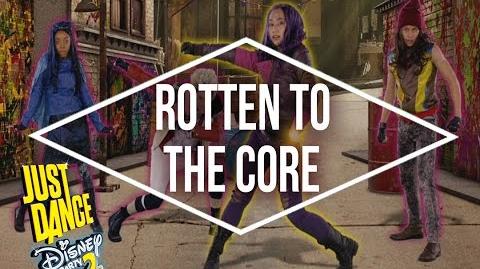 Rotten to the Core - Gameplay Teaser (US) 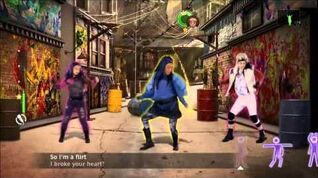 Retrieved from "https://justdance.fandom.com/wiki/Rotten_to_the_Core?oldid=1202073"
Community content is available under CC-BY-SA unless otherwise noted.