C1 is a teenage girl. Her shoulder length purple hair flows until it becomes wavy at the ends. She wears a purple dress with thick straps and a V-shaped bodice. On the right side of the dress is a big purple flower decorated with silver glitter. The skirt of the dress is tutu-shaped, extends to her knees, and is purple with dark pink sections scattered on the skirt. Big, clear glitter dots decorate the skirt, similar to the flower on the dress. Her footwear includes black flats with thin black buckles. She resembles Mal.

C2 is a teenage girl. She has black and blue hair that is slightly wavy, and part of it is tied into a style that resembles a crown. Her outfit includes a blue dress with thick straps. There is a blue rose on the right side of the dress. The dress also has a blue bow secured at the back. The skirt of the dress is completely ruffled and extends to her knees. Her shoes are matching blue flats with thin blue buckles securing her feet. She resembles Evie.

C1 is a teenage boy. His black hair is short, and is nearly down to a buzz cut. He wears a blue tuxedo jacket over a white dress shirt. The shirt’s sleeves peek out of the sleeves of the jacket. He also wears matching blue dress pants that are secured with a black belt. The sides of the pants have vertical golden stripes running all the way down. His footwear includes shiny black dress shoes. He resembles Ben.

C2 is a teenage boy. He has brown hair that parts at the right, and the majority lies at the left. He has on a red tuxedo jacket over a white dress shirt with black buttons. A black bow tie is visible near the collar of the shirt. He also wears black dress pants, which are secured with a black belt. His shoes are black dress shoes with brown soles. He resembles Doug.

At the start of the routine, there are multicolored fireworks that fly up towards the night sky. All of them set off simutaneously as the setting fades and transitions to the next background.

This next background appears to be set during midnight. In the back is a castle that resembles Auradon Prep. On the castle are many blue roofs, with stone towers with the lights on inside the two side towers. The majority of the windows have their lights turned off, while the windows that are lit up have only dimmed their lights. There is a small dark arch in the middle of the castle, meant for an entryway in.

In front of the castle is a low wall made of small stones with smaller round columns stacked atop the wall. The columns line up the top of the wall. Positioned at the center is a small golden pedestal with tiny yellow lights lining the sides. There are tiny multicolored lights that line the wall and flash to the beat of the song. Two spotlights also flash out of the corners of the screen. Above the pedestal is the head of the Auradon Prep mascot. It is a lion’s head made completely of stone.

More fireworks start to light up at the start of the second chorus and this continues for the remainder of the song. The routine ends when the camera quickly pans up to the sky, where more fireworks zoom up and explode randomly to create a fireworks display.

Gold Move: Raise both hands in the air.

Set It Off on the Just Dance: Disney Party 2 menu

Appearance on the tutorial/loading screen (for Duet routines) 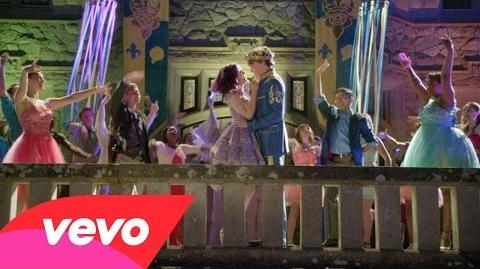 Descendants Cast - Set it Off (From "Descendants") 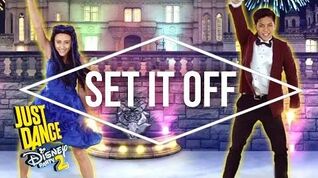 Just Dance Disney Party 2 – Descendants – Set It Off - Official US

Retrieved from "https://justdance.fandom.com/wiki/Set_it_Off?oldid=1161992"
Community content is available under CC-BY-SA unless otherwise noted.