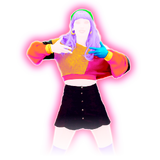 The coach is a woman with long pale lavender hair. She has a yellow hoop earrings and is wearing a lime green beanie. She has on a pink sweater with dark violet rings above her elbows and yellow cuffs, and most of the sweater, from left side of her sweater to the dark violet ring above her left elbow, is orange. She is wearing a black skirt with buttons down the front, lavender knee socks, and light blue combat boots with dark purple laces. Her facial features are more visible than most dancers' and have a lavender tone. She also has a light purple outline.

The routine is performed by a duet of a man and a woman. They have dark orange outlines.

P1 is a male cobra. The costume is mainly purple with pink colors on the underside, which has black lines on the underside and diamond-like designs on the back to emulate scales. The head has black pupils with white sclera and an orange forked tongue emerging from its mouth. The costume also has blue sleeves for his arms and it is attached to a beige straw vase.

P2 has dark brown braided long hair with pink streaks. She wears a purple sports bra with golden lining, long cape with golden linings and yellow, red and black circular patterns covering her hips, trousers with similar patterns and low top pink converse sneakers with white soles and laces. She also wears golden chains on her head, small circular glasses with golden frame and black lenses, a golden bangle on her right arm and an orange band on her left wrist. 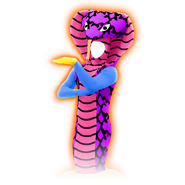 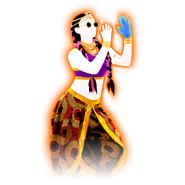 The background starts off and ends in an ordinary city street with apartments, a fire hydrant, trashcans, and a tree. The title of the song is seen in the background. But then the city starts to become colorful. As the coach walks towards the center, a red car passes. Colorful clay shapes appear around the dancer. During the chorus, monsters appear. Before the chorus, the sidewalk changes colors. In the pre-chorus, a piece of the sidewalk gets lifted up by a monster. At a certain point, the city starts to disappear, showing a white background.

This section is a stub. You can help by adding to it.
The background takes place in an African village.  There are a bunch of vases with green snakes in them. During the chorus, the background switches to a wall full of snakes, vases, candlesticks, and lanterns. The background can change from day to night.

Gold Move: Lower your arms in a circle. 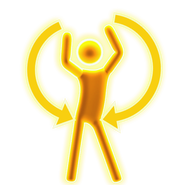 There is 1 Gold Move in the Snake Version routine:

Soy Yo is featured in the following playlists: 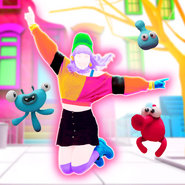 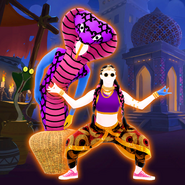 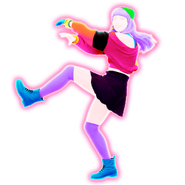 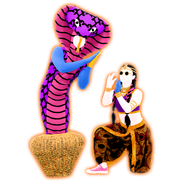 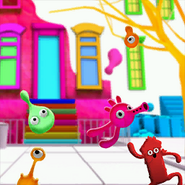 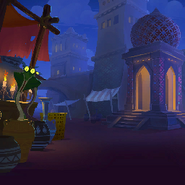 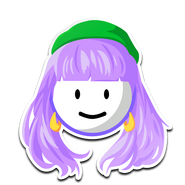 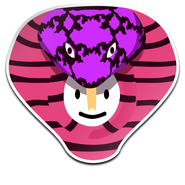 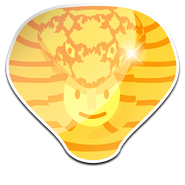 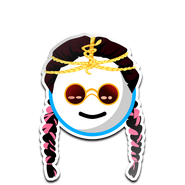 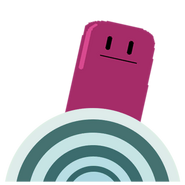 Sticker unlocked from dancing to Soy Yo three times 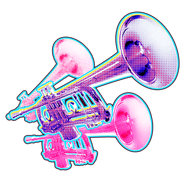 Soy Yo on the Just Dance Now menu (outdated, computer)

Soy Yo on the Just Dance Now menu (outdated, phone)

Soy Yo on the Just Dance Now menu (updated, computer)

Soy Yo on the Just Dance Now menu (updated, phone)

Behind the scenes
(Classic)

Behind the Scenes
(Snake Version, P1) 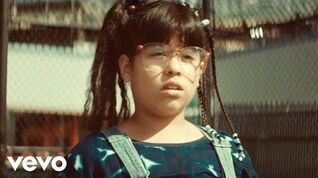 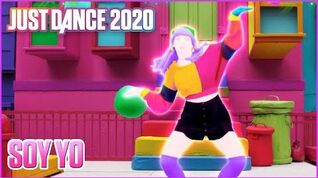 Soy Yo - Gameplay Teaser (US) 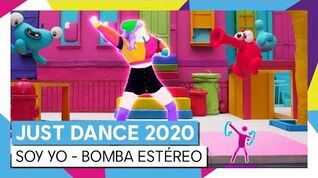 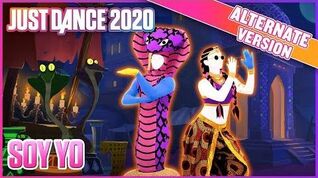 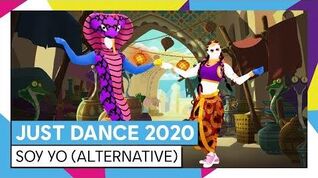 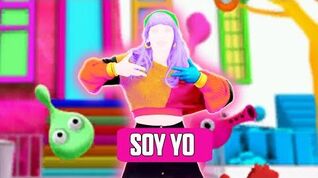 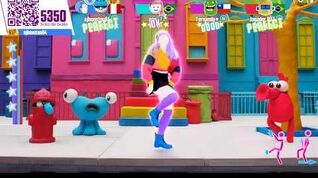 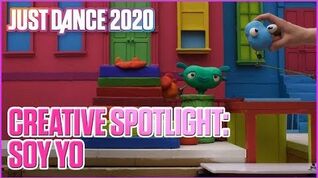 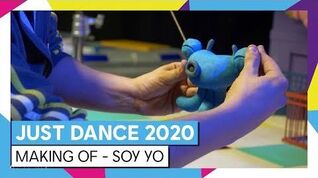 Retrieved from "https://justdance.fandom.com/wiki/Soy_Yo?oldid=1296386"
Community content is available under CC-BY-SA unless otherwise noted.