The Shoop Shoop Song (It’s in His Kiss)

The Shoop Shoop Song
(It’s in His Kiss)

The dancers are both young-adult women dressed in R&R clothing.

P1 has purple hair in lime green curlers. She wears a lime green dress with white lacing around her lower breasts and the end of the dress. She also has a lime green bracelet on her right wrist. She is barefoot.

P2 has frizzy purple hair in pigtails tied by hot pink ribbons. She wears a purple dress with hot pink lining and a hot pink line around her chest area. She is also barefoot.

In the remake both dancers have different color schemes and their faces are less visible. They now have a purple glowing outline.

P1 has her hair in a dark shade of red with light blue curlers. Her dress is now light blue, and the lace elements are now dark red. Her bracelet is also now light blue.

P2 has dark red hair. Her dress is now dark red, and the pink elements of her dress are now in a light shade of blue. Her ribbons are also light blue.

The background takes place in a barber shop. There are arm chairs, as well as a striped blue, white and red barber shop pole. The floor tiles are light and dark green in color, and they make a checkered pattern. Hearts, bubbles, and kissy lips appear floating in the background throughout the routine.

In the Just Dance Now remake, the floor tiles are now dark green and orange with reflective features. Also, the orange parts on the walls and furniture are now red.

Gold Move 1: Point at each other.
Gold Moves 2 and 3: Throw your arms out. For P1, have your left arm vertical and your right arm horizontal. For P2, do the exact opposite. 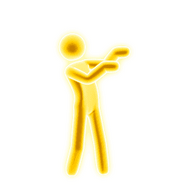 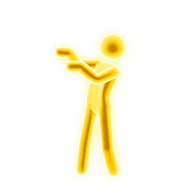 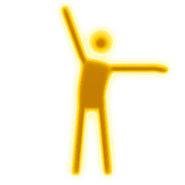 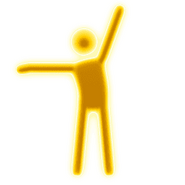 The Shoop Shoop Song
(It’s in His Kiss) 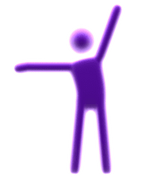 Beta pictogram
(not a Gold Move) 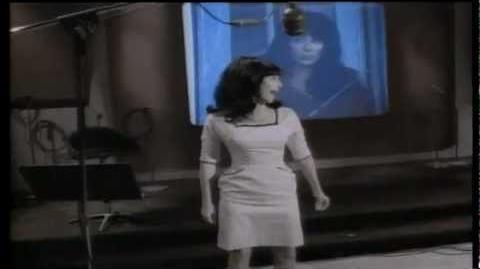 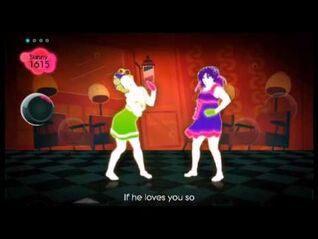 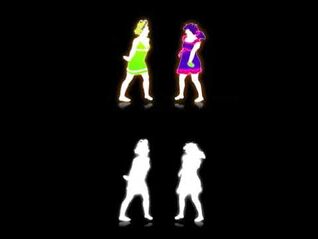 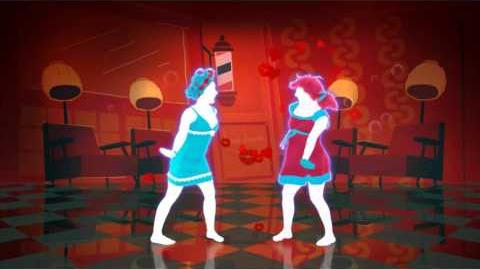