Twist Your Frown Upside Down

P1 is a teenage girl who resembles Lela. Her blush blonde hair falls right over her shoulders and past the chest region. She wears a white tent dress where the collar and sleeve regions have bright red linings. At the bottom of the dress, there is a matching tulip pattern where the stems are white with black edging. Her footwear includes tall white boots that stop just below her knees.

P2 is a teenage boy who resembles Tanner. He has hair done in a buzz cut. He wears a white polo shirt with thick dull blue stripes. Over that, he wears a dark blue jacket; the left side has a pocket, and the right side has a giant letter "T" stitched in white, which stands for his first initial. The center of his jacket and the middle of his right sleeve are edged in white. He wears buttery yellow shorts held up by a brown belt, as well as gray sneakers with white socks.

The routine takes place out in a schoolyard, depicting the one from Windy Bluff High School. There are thick trees that cover the dancers at the start before unraveling so they can dance. Everything stands on a neatly mowed lawn, including the circular aqua-colored courtyard tables, their accompanying spinning white umbrellas that have changing multicolored stripes, and more trees. Behind those are short bushes and the side of the school. This side is covered with white corridors, revealing walls with multiple school posters.

The dancers march around the schoolyard, revealing other parts of the school. To the right is a giant tree covered in pink leaves. Standing not far is a teenage girl with flowing brown hair. She wears a white sweater with black stripes and tiny flower imprints. She also has a neat gray skirt and matching gray sneakers with white laces. She holds a phone in her hand, which she pays no more attention to when the dancers coerce her into dancing with them.

Again, the dancers (excluding said teenage girl) march to another part of the schoolyard. A giant green tree stands far off to the left. In front of it is a bored-looking teenage boy with matted brown hair. He wears a dark red T-shirt, black leggings, and white sneakers with a matching white watch on his right wrist. He also has a gray backpack, which he quickly abandons when the dancers convince him to join in.

Both dancers march for a third time, this time standing right in the middle of the schoolyard. The teenagers they had interacted with join in a little later, too. The routine concludes when some trees cover the schoolyard, akin to the start.

Gold Move: Put your arms down.

Twist Your Frown Upside Down 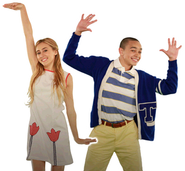 Twist Your Frown Upside Down on the Just Dance: Disney Party 2 menu 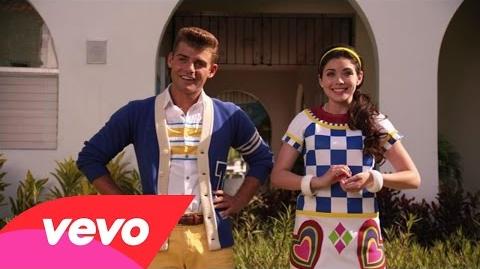 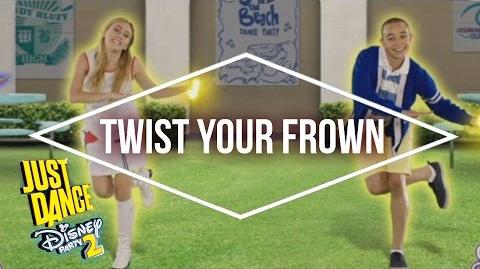 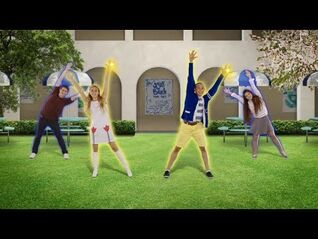 Retrieved from "https://justdance.fandom.com/wiki/Twist_Your_Frown_Upside_Down?oldid=1369386"
Community content is available under CC-BY-SA unless otherwise noted.