P1 is a boy dressed up as Kanchi/Eddie. He has short brown hair, a pair of orange headphones, an olive green coat with white buttons and a white stripe, a light blue polo underneath, a red-magenta glove, blue jeans, and black shoes.

P2 is a boy dressed up as Keita/Nate. He has black hair in a crest, a red jacket with a grey hoodie, dark grey jeans, and blue shoes with a white stripe on the bottom.

P3 is a girl dressed up as Inaho/Hailey. She has brown hair in a bob cut, a pair of round glasses, a light pink jacket with white and pastel blue highlights, a pastel blue T-shirt underneath with a yellow musical note on the right, a white skirt, blue leggins, and yellow and white shoes.

P4 is a boy dressed up as Kuma/Bear. He has black hair in a crest, a blue and red New York-like jacket with a light blue-grey T-shirt underneath, a pair of black shorts, and white Air Force shoes.

The coaches have many visual effects throughout the routine, such as colorful overlapping silhouettes and flashes. 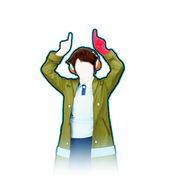 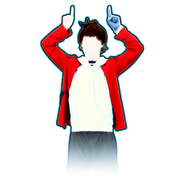 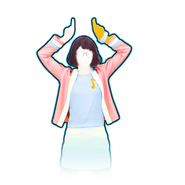 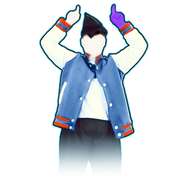 The routine starts with what seems to be a black hole, teleporting the coaches on a moon-like terrain. This small planet features a spaceship base with signal towers, along with Jibanyan and a relative of his dancing behind the coaches; behind the planet, there are the Earth, the Moon (with a silhouette of USApyon banging a hammer against a piece of iron) and all its successive planets of the Solar System, along with flying food, Yo-kai, and colorful stars.

After the planet rotates twice, the black hole teleports the coaches on a green-bluish planet with Komasan and Komajiro dancing on it, other Yo-kai and other planets that pulse and create circular waves.

Then, the coaches float in mid-air, surrounded by Yo-kai, food, stars, and many planets, until they reach a purple planet with Jibanyan and his relative; there are two other planets behind it, and the right one shows dancing clones of Wiglin.

After that, the coaches return on the first planet, which is then replaced by a similar one with USApyon and relatives of Jibanyan; at the end, the coaches are absorbed by the black hole.

Gold Move 1: Slowly put your arms up.
Gold Moves 2 and 3: Lean towards the left, put your left hand on your head, and point to the sky with your right. 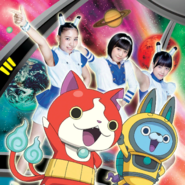 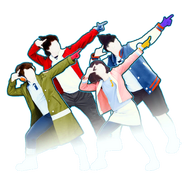 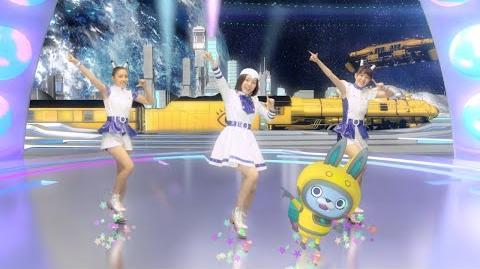 Retrieved from "https://justdance.fandom.com/wiki/Uch%C5%AB_Dance!?oldid=1205905"
Community content is available under CC-BY-SA unless otherwise noted.