Umbrella (With an Umbrella)

Umbrella
(With an Umbrella)

"Umbrella" (With an Umbrella) is playable on Just Dance 4. On the PAL Wii, the song is only included on the Special Edition.

The dancer is a woman with black curly hair. She wears a black dress that almost reveals her cleavage while being connected to the neck, with the skirt resembling the top of an umbrella, along with a pair of black strapped heels, and a shorter glove than the classic version. At the bridge, her dress turns dark violet blue, and when she performs the gold move, it turns golden. She holds an umbrella as a prop that changes between gray and gold. Her glove is red and is shorter than the classic routine.

The background is a rainy pitch black scenario. In the chorus, the rain becomes more luminous and the scenery becomes dark blue. When the dancer performs the gold move it features feature gold rain. At some points in the routine, the rain slows down.

Gold Move: Lift your umbrella to the right, and kick with your left leg sideways. 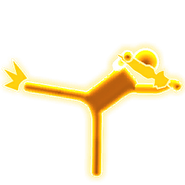 Umbrella (With an Umbrella) appears in Puppet/Party Master Modes. Here are the captions attributed to her dance moves. 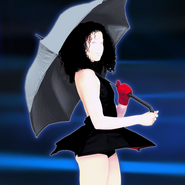 Umbrella (With an Umbrella) 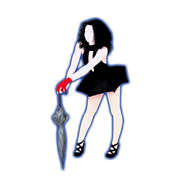 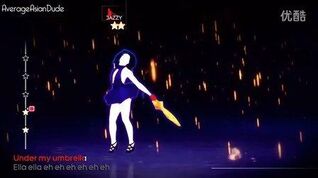 跳舞Just Dance 4- Umbrella (With An Umbrella) 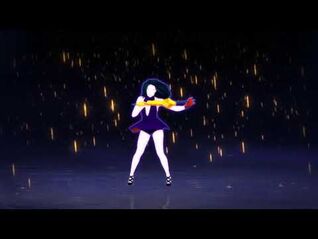