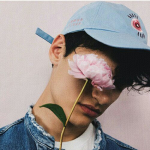 aka greGOry TO HELL (read all the caps).

Hi :D You entered my page, so that probably means you want to know some stuff about me xD read on...

Some of My Favorite Pages Are:

I Luh Ya Papi (The DLC by Jennifer Lopez and French Montana, featured in Just Dance 2015)

AmericanRain089x is a member of the All I Want For Christmas Is You Army!

AmericanRain089x is a member of the Shane Dawson Army!

Join the movement! We need the Shane Dawson's songs Superluv and Famous YouTuber on Just Dance Unlimited/Just Dance 2017! Shane Dawson is a very funny YouTuber, and we need him on the game!

This is an altar for anyone who supports the #WeWantShaneDawson movement. Simply put {{WeWantShane}}onto your userpage if you want to join the army!== #WeWantPeppaPig == AmericanRain089x is the leader of the Peppa Pig Army!

The only official MirandaSings army on the Just Dance Wiki. We wurtship our bootiful goddests of lisstick. Hopefully one of her songs will be in a game soon.

Otherwise we'll be so titted what the even heck ubisoft is a h8r? h8rs bck off r u kidding me ;(

Some of my Images!

Retrieved from "https://justdance.fandom.com/wiki/User:AmericanRain089x?oldid=723112"
Community content is available under CC-BY-SA unless otherwise noted.