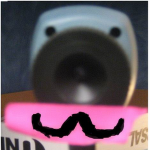 Hello I am CAMERAwMUSTACHE.  I am a human who lives in the Milky Way Galaxy.

-You, probably, at some point

This is way outdated but the list is nostalgic

Some Stuff About Me!

Games are for the NTSC Wii unless otherwise noted

DLCs are for the Wii unless otherwise noted

CAMERAwMUSTACHE is a member of the Dancing Queen Army!

1 of 5
Add photo
This altar is for anyone who supports the #WeWantDancingQueen movement. Simply put {{WeWantDancingQueen}} onto your userpage to join the army!
Retrieved from "https://justdance.fandom.com/wiki/User:CAMERAwMUSTACHE?oldid=1251736"
Community content is available under CC-BY-SA unless otherwise noted.