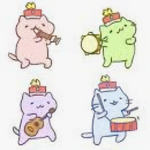 * Although the description on that video says that only I made all of the captions, I actually had edited them AFTER someone else had made them.

Just look at the very top of my profile - my name is up top (xd). I started Just Dance when my family realized we needed a way to exercise. So, when Xbox 360's Kinect hardware was released, we jumped at the chance to get it. Just Dance 4 was the 4th game I got for Kinect; later on, I got Just Dance 2016 and Just Dance: Disney Party 2 because I was bored with the other Kinect games. My old profile (which is gonna be my dad’s Xbox Live account pretty soon) was originaly called “OrdainedSeven4” but changed to “bowwow2meow“ in mid-2017.

Then, as a treat, my dad suggested getting a virtual reality headset on thr PS4 (because it was the cheapest). I got the later games to try out the devices that came along with the console. I came up with the name “bowwow2meow” with it (I ran out of ideas and love cats and dogs, okay??? All my made-up usernames have the word “meow“ in it!).

In mid 2019, I got an Xbox One S and am planning to use it to get Just Dance 2019. And I just found out my email was associated with an Xbox Live account, too - so I’ll be using that as my new account and let my dad handle my old one. So basically I’m starting my stats all over and am excited to use my Xbox One S! Also, I got Just Dance 2015 recently but it’s quite laggy so I’ll have to wait for it to be completely lag-free. (My alternate account is BrainyAsh943511.)

Well there you have it. I'm very skilled at all the games, and tend to go wild with the controllers (teehee >:D). Thanks for reading and cheers! <3333

My Photos and GIFs

If you see a photo that credits me as "Added by Meow2BowWow", then I took that picture from a source. My specialty is photographing straight from an Apple device.

Congratulations if you were trying to report one of my photos or GIFs here. You're in the right place! (Almost. Just go to my Message Wall and explain the issue. You should already know how to leave a message on my Wall.)

NOTE: All personal images by me (like TV screenshots) should not be uploaded without my permission. All other images and GIFs (gameplay GIFs, funny GIFs) are free to use, as long as they're not abused!

On Xbox One S

Retrieved from "https://justdance.fandom.com/wiki/User:Meow2BowWow?oldid=1279889"
Community content is available under CC-BY-SA unless otherwise noted.