Wake Me Up Before You Go-Go
(From the Emoji Movie)

P1 is Gene from The Emoji Movie. He is a yellow emoji with a small yellow tuft combed on the right, brown eyebrows and green eyes. His glove is green and his tights are cyan.

P2 is Jailbreak from The Emoji Movie. She is a brown emoji with a black beanie, blue-purple hair, black eyebrows, long eyelashes, and brown eyes. Her glove is red and her tights are purple. 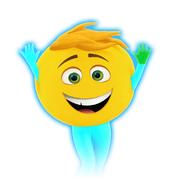 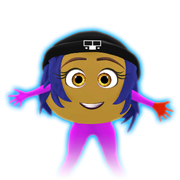 The routine starts on an ordinary messaging app where somebody off-screen is communicating to their friend using Gene, a "Smiling cat with heart eyes" emoji, Hi-5, and Jailbreak on their smartphone. The friend then replies using Hi-5 and Gene too to reply to the messages. Once the conversation ends, Gene comes to life and a spotlight is shone on him before the same thing happens to Jailbreak.

The routine takes place in a big circular room with LED light displays on the wall, which flashes stars, pink, light green, and purple, and a checker pattern on the floor, which flashes red, green, pink and turquoise in some parts of the routine. Before the start of the chorus, Hi-5 walks into the room in the background and some emojis pop up in the light displays while Gene and Jailbreak perform the "Face with stuck-out tongue and winking eye" emoji together, the "Face blowing a kiss" and "Flushed face" emoji respectively, the "Money-mouth face" and "Winking face" emoji respectively & the "Smiling face with heart eyes" emoji together, all in order twice.

In the chorus, the background briefly turns black before turning into a dome with red, green, yellow, purple and orange floating tiles on the floor and 2D speakers and dots of LED lights on the wall. The speakers move along the wall in a clockwise manner and Hi-5 can be seen dancing on a floating red tile. As the chorus moves on, a line of tiles drop down onto the floor to the beat of the song before receding away bit by bit. At the end of the chorus, the tiles move away from Gene and Jailbreak to the beat of the song.

In the bridge, the dome changes to a wall of 18 icons that have pink, lime green, purple, cream, orange, and sky blue colors. The tiles then disappear to reveal several emojis, including Gene's parents Mel and Mary Meh, Poop, and Steven, a devil emoji. The lighting then changes and the LED lights behind the emoji turn on, making them look dark.

Once the bridge ends, the background turns black and returns to the circular room from the beginning, but this time, the emojis from the aforementioned bridge and a disco ball can now be seen in the background.

Gold Move 1: Open your right and left arm consecutively.
Gold Move 2: Stretch out your arms (P1 does it while kneeling in front of P2).
Gold Move 3: Move your right arm in a counterclockwise motion while lifting your left knee up.

This routine appears in the following Dance Quest map:

This routine is featured in the following playlists:

See also Wake Me Up Before You Go-Go#General 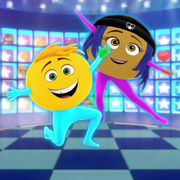 Wake Me Up Before You Go-Go (From The Emoji Movie) 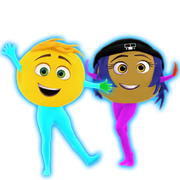 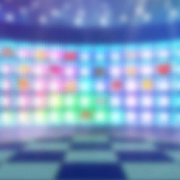 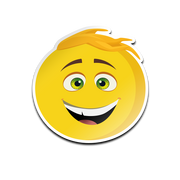 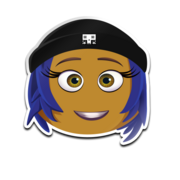 Wake Me Up Before You Go-Go (From The Emoji Movie) on the Just Dance Now menu (updated, computer)

Wake Me Up Before You Go-Go (From The Emoji Movie) on the Just Dance Now menu (updated, phone)

Wake Me Up Before You Go-Go (From The Emoji Movie) on the Just Dance Now menu (re-updated, computer)

Wake Me Up Before You Go-Go (From The Emoji Movie) on the Just Dance Now menu (re-updated, phone)

Glitch with the pictogram bar on the Just Dance Now preview 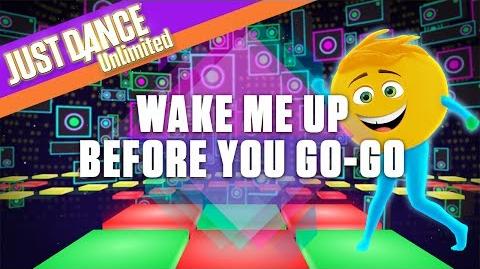 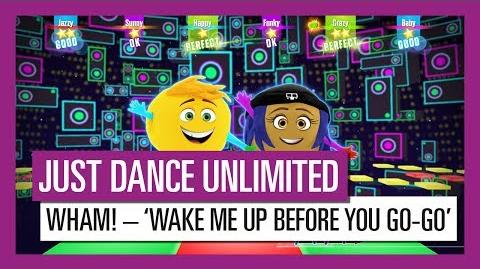 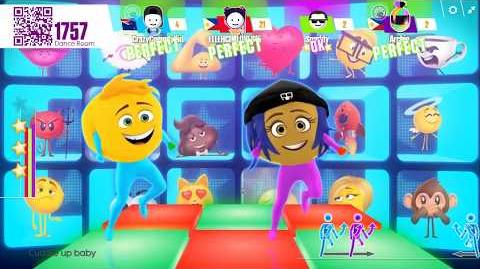 Retrieved from "https://justdance.fandom.com/wiki/Wake_Me_Up_Before_You_Go-Go/From_the_Emoji_Movie?oldid=1369941"
Community content is available under CC-BY-SA unless otherwise noted.