We can't stop the music

"We Can’t Stop the Music" (stylized in sentence case in-game) by Da Pump is featured on Just Dance Wii 2. 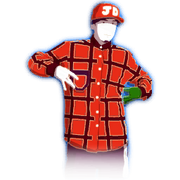 The dancer is a male teenager who wears a red baseball cap that says "JD", a red and maroon checkered buttoned-up shirt, cranberry-colored pants, and red shoes.

The routine takes place in an abandoned skyscraper, with spray-painted all over the walls. Occasionally, quotes from the song (such as "SAY WHAT?", "FUNK" and "DO IT") show up behind the dancer, in spray paint. There is also a TV with silhouettes of other dancers from Just Dance Wii on it. Underneath the TV, there is a boombox.

Gold Moves 1 and 2: Bring your right hand down diagonally to the left, while raising your left leg.
Gold Move 3: Put both hands together and shake.

We Can’t Stop the Music is featured in the following playlists: 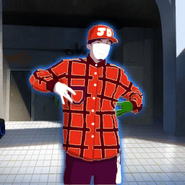 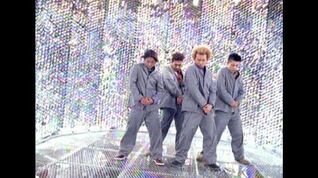 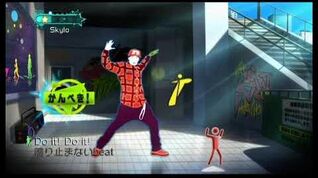