"What a Girl Is" by Dove Cameron from Liv and Maddie is featured on Just Dance: Disney Party 2.

The dancer is a teenage girl who resembles Liv from the show. She has wavy golden blonde hair that flows past her shoulders. In most of the routine, she wears a light blue short sleeved shirt. Around her neck is a brown scarf. Her bottoms include skinny jeans with tiny tears near the top. She accessorizes with bright white sneakers. When the first two choruses start, she has on a light gray duster jacket that freely hangs on her shoulders.

The takes place in a room similar to Liv’s room and draws elements from the soundtrack version of the song’ music video. The coach appears to be recording a video of herself.

The room is adorned with a wooden floor under a large purple carpet, as well as gray walls. Some square pillows are thown off to the left side. Over them are two pictures where only small parts of them can be seen due to the camera not seeing them. Beside them is a white bookcase with multiple rows of brown shelves. They contain decorative furniture and other objects such as books, teal sunglasses, and photo frames. There is a small white drawer on the side which has more furniture, like a clock, on top of it. Above the drawer are three small pictures.

The right side has a pink couch with purple stripes. At the left is a white electric outlet. Behind the couch is also a large square mosiac design of the same colors, and twinking white lights. A tall, dark pink vase with one faux pink plant can be seen next to the couch. There are also white curtains that cover the window off-screen, but some daylight shines the room, to the song’s beat.

The camera abruptly zooms in and out to indicate the next changes of the video the coach is recording. She stops recording at the end of the routine to take her own selfie.

What a Girl Is in the Just Dance: Disney Party 2 menu
Add a photo to this gallery 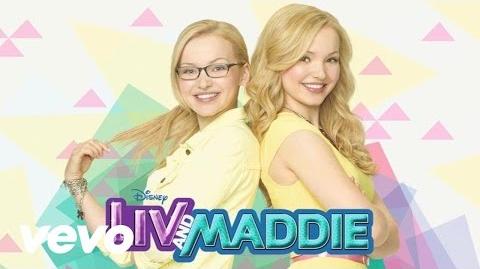 Dove Cameron - What a Girl Is (From "Liv & Maddie" Audio Only) 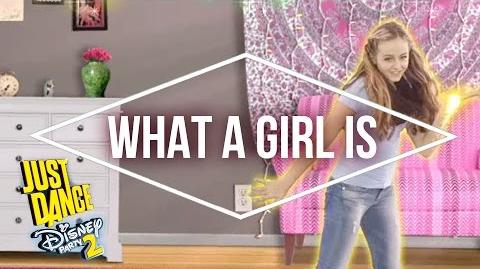 What a Girl Is - Gameplay Teaser (US) 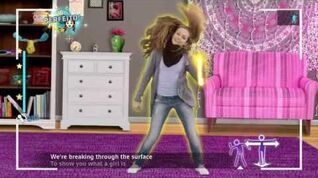 What a Girl Is - Just Dance Disney Party 2 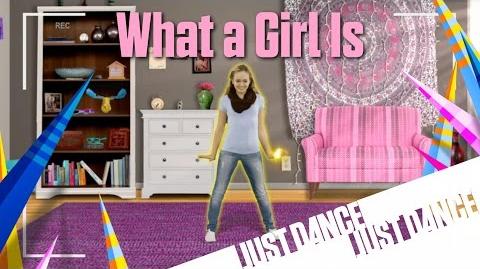 What a Girl Is - Just Dance Disney Party 2 (No GUI)

Retrieved from "https://justdance.fandom.com/wiki/What_a_Girl_Is?oldid=1171547"
Community content is available under CC-BY-SA unless otherwise noted.