Just Dance Wii U
Yo-Kai Watch Dance: Just Dance Special Version (also known as 妖怪ウォッチダンス：ジャストダンススペシャルバージョン) is a Japanese game in the Just Dance franchise that was released in Japan on December 5, 2015.[1] The game is a crossover with the Yo-Kai Watch series and is the fourth Japanese Just Dance release.

Level-5 announced on their website that the game would have been released on December 5, 2015. Yo-kai Watch Dance: Just Dance Special Version would go for 4,662 yen when it releases, and would also be available as part of a “Wii Remote Plus Set” for 7,236 yen. The game would also include the “Bully Captain Song Medal”. The Wii U GamePad can also read QR codes for the game. In addition to a look at the game cover, Level-5 revealed that the game will have some of the newer songs like “Uchuu (Space) Dance” and “Jinsei (Life) Dramatic,” along with Yo-kai Watch’s heroine Hailey and the Yo-kai Upton.[2]

The game runs on an updated version of Just Dance 2014’s engine, just like its predecessor, meaning the menus of the three games look similar to each other. 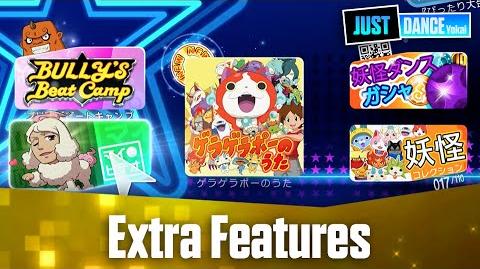 Retrieved from "https://justdance.fandom.com/wiki/Yo-kai_Watch_Dance:_Just_Dance_Special_Edition?oldid=1151458"
Community content is available under CC-BY-SA unless otherwise noted.